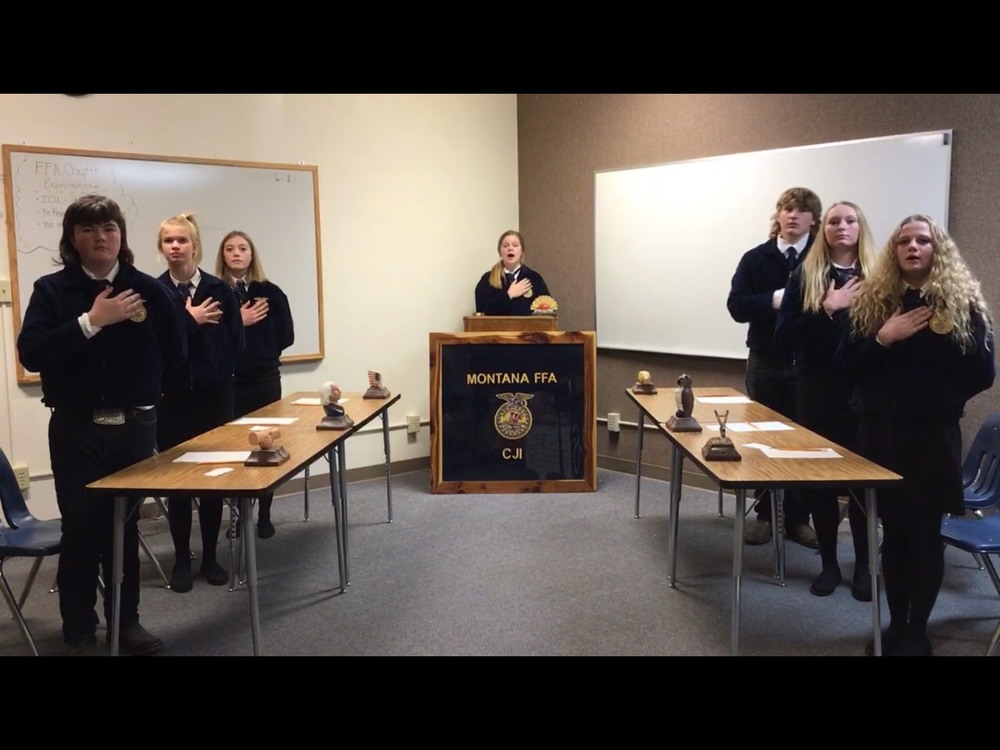 This year the John Deere Ag Expo (JDAE) usually held on campus at MSU Bozeman, had to go virtual due to COVID-19. It presented its challenges but 12 of the 14 members in our CJI chapter were able to compete in six events. Competing in Horse Evaluation were Alyson Leach, MaRae Smail, Jordan Leach, Sydney Hawks, and Grace Wickum. Alyson Leach, MaRae Smail, Jordan Leach, Sydney Hawks, Lily Wickum, Shawna Osburn, Savannah Riggin, Makai Kealoha-Kuegler, and Adam Grammar competed in Livestock Judging. Our Senior member, Emma Wickum, competed in Extemporaneous Speaking which is no easy task, especially with a virtual setting. Competing in both Vet Science and Creed Speaking was Jordan Leach. We finished out the week brushing up on our parliamentary procedure with Conduct of Chapter Meetings. The conduct team members are Sydney Hawks, Jordan Leach, Lily Wickum, Makai Kealoha-Kuegler, Savannah Riggin, Shawna Osburn, and Sebastian Mansfield. We weren't able to compete in mechanics but hope to be able to do so later this year. Nine of our members will also be taking part in a virtual interactive leadership conference on the 17th and 18th of this month. Event placings for all of the contests should be out by the end of next week! Earlier this month, our chapter was able to participate in the National Convention which was also held virtually. We gathered in the classroom and watched sessions together while on our lunch break. The convention registration also came with a number of workshops that we will be partaking in over the winter months. We are all excited to be able to continue our chapter membership and look forward to this year's events!

Thank you to everyone for your continued support,
Stefanie Leach