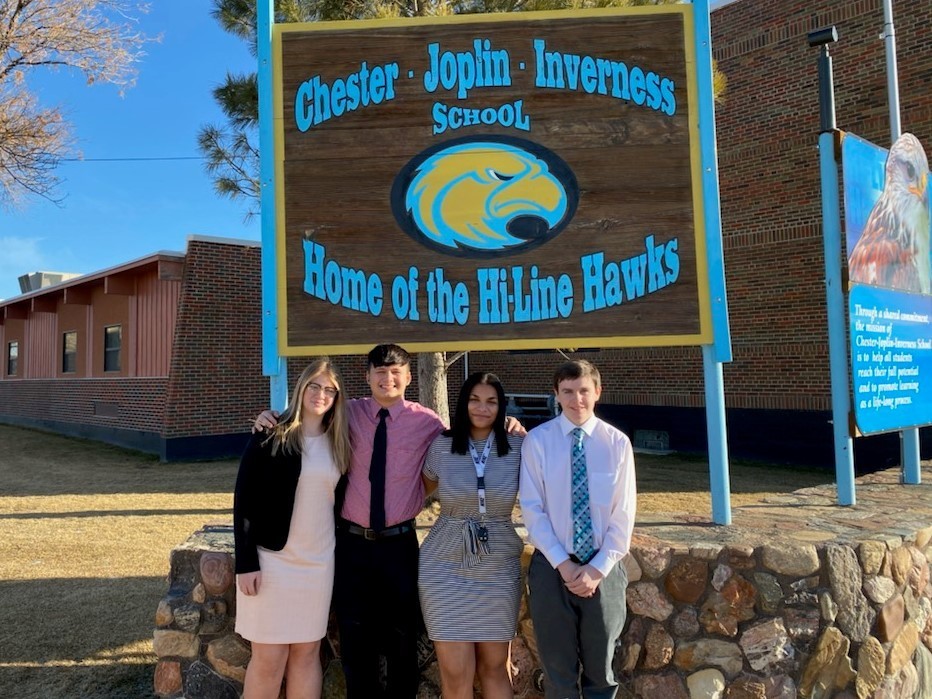 The CJI Hawks Speech team competed Saturday, January 23rd, at the Northern B/C Speech and Drama Divisional Tournament.  CJI served as the virtual host for the divisional tournament which saw teams from seven Class C schools and six Class B schools compete to qualify for the State B-C Speech and Drama Tournament hosted by Huntley Project.

The Hawks were once again led by senior Emma Wickum, who claimed her second consecutive divisional championship in Extemporaneous Speaking.  Wickum has qualified for state each of the last four years.  Senior Cain Cole finished second in Memorized Public Address.  Cole lost a heartbreaking three-way tiebreaker for first place in his event.  Cole will compete at the state tournament for the second time after qualifying for state last year in Dramatic Interp.  Junior Azeria McIntosh lost a three-way tiebreaker to qualify for the last spot in Spontaneous Interp finals. McIntosh finished in ninth place overall. Freshman Martin Fulbright finished second in Informative Speaking which earned him the right to compete at the state tournament.

As a team, the Hawks had their best finish of the season winning first place in Class C Speech with 31 points.

Three members of the CJI Speech team competed at the State B-C Speech, Debate, and Drama Virtual Tournament on January 28, 29, and 30th.   Over 40 Class B and Class C schools competed at the state meet hosted by Huntley Project.  Senior Emma Wickum did what she has done all year and placed in the top eight of her event.  Wickum finished sixth at state in Extemporaneous Speaking.  Senior Cain Cole just missed qualifying for the final round in Memorized Public Address.   Cole ended up in 9th place in MPA.   Freshman Martin Fulbright qualified for semi-finals but did not break into finals.  Fulbright finished in 11th place in Informative Speaking.

Overall, the CJI Hawks Speech team had a great season given all the changes they had to adapt to this very unconventional virtual season.  The Hawks will miss seniors, Emma Wickum and Cain Cole, next year but hope to grow the size of the speech team to continue its legacy of success.