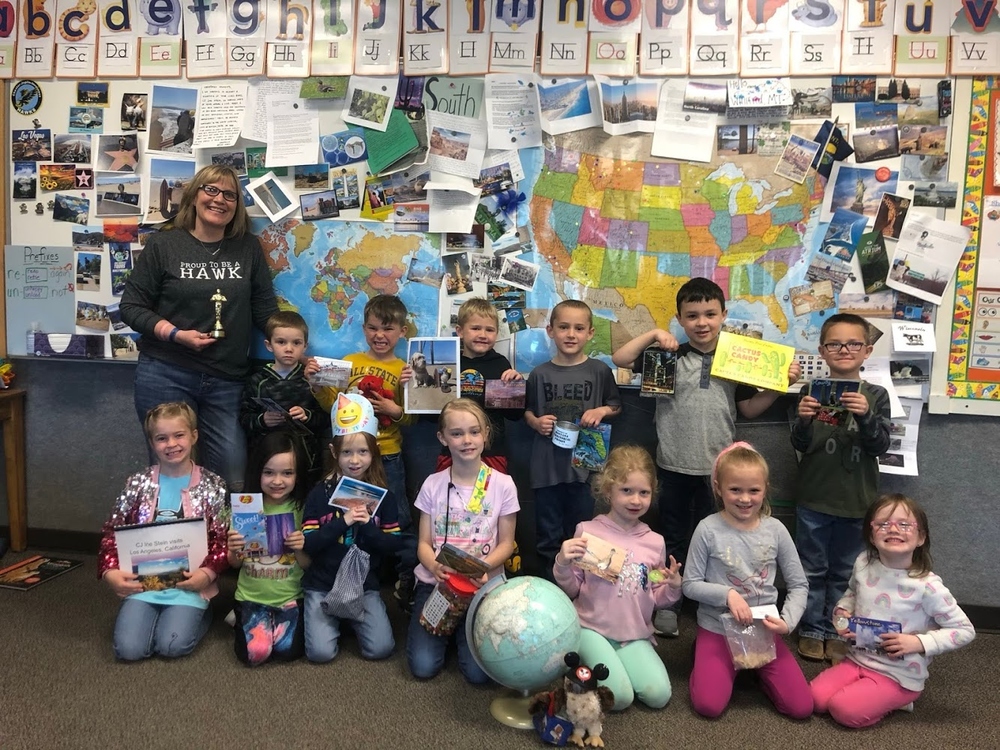 In January, Mrs. Fraser’s kindergarteners got a new class pet, a magical stuffed hawk named CJ Ine Stein. We enjoyed having him in our classroom; showing him how to be a good hawk, having him sit on our desk, holding him during storytime, and teaching him about numbers, nouns, and verbs. You name it, CJ was there watching and learning with us. Then came a snowstorm in February and off he flew to find warmer weather. The kindergartners were very worried, so we figured the best way to find him was to ask others for their help. We posted his picture on Facebook, we called friends and grandparents asking if they spotted him to please send us a postcard or write us a note. Mrs. Fraser figured that since we were studying maps, landforms, differences between cities, towns and states, continents, and national monuments in Social Studies that we would ask them to give us a little information about where they saw him. Maybe even tell us about the weather and other animals there.

We were blown away by the response! We received 83 postcards, 26 letters, 5 packages, and several emails. We got mail from New Zealand, Japan, Sweden, Scotland, and 27 of our states. We got postcards from Mount Rushmore, the White House, and the Statue of Liberty; which we thought was very cool because we had just learned about them! He noticed that he loved stopping at water spots because we got several postcards with beaches, dams, lighthouses, and LONG bridges. We even got pictures of him learning to surf!  He took in some professional ball, because we got postcards from Lambeau field, Dodgers Stadium, and Empower Field, just to name a few. Plus, several zoo postcards; we think he went to them for the “free food”. We got cactus candy, a “real-but dead-”scorpion toy, almonds, and pistachios from a nut farm, a huge container of Jelly-Bellies from the factory, stickers, suckers, a wildlife coloring book, a tin mug, a red stuffed animal bear, and Mrs. Fraser got a Golden Globe statue and a Hollywood star magnet with her name on it!  A 7th grade class from Minnesota and a retired kindergarten teacher from California wrote us personal books about their area and spotting CJ Ine Stein. We even got a video of him talking after he finished climbing to the Hollywood sign. But, not only did we learn about so many other states, we received lots of mail about our own amazing state. We found out that Montana has geysers, a really old jail, real buffalo, beautiful National parks, the largest hydraulically filled earth dam in the world, lots of places to ski areas, and even a zoo (“that isn’t in Missoula-which we think it should be because of its name”). Each day we patiently waited for the mail to come so we could put a sticker on our map showing where he had been spotted.

We were amazed that CJ Ine Stein had covered so much of the United States! And, we were loving getting all the mail and learning about all the new places, but finally, on April 16th we opened our classroom door and there he was, waiting for us! He had ditched his earmuffs and had a suitcase with a note saying he was tired of flying and ready to stay with us until we graduated in May. We would like to thank everyone who wrote to us and helped us learn SO MUCH about our incredible world!