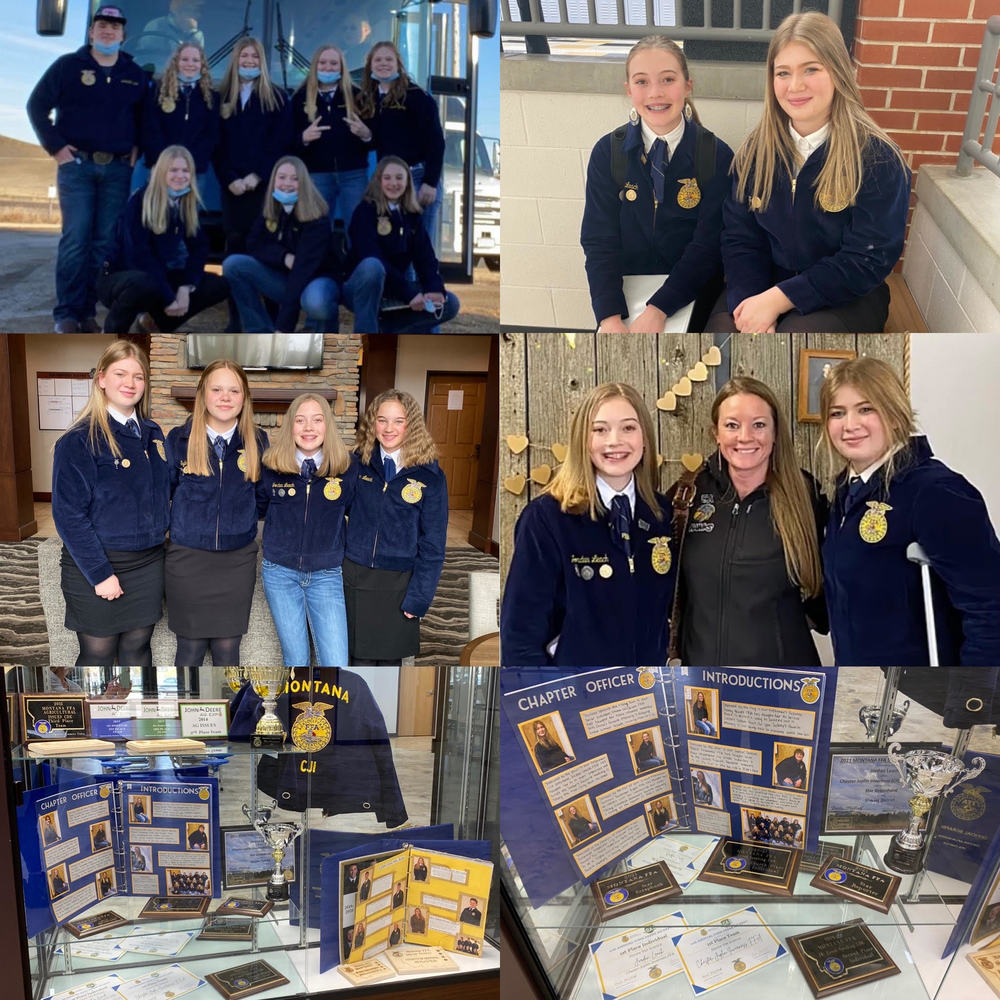 The CJI FFA chapter finished out the year strong at District and State competitions. We crisscrossed the great state of Montana over the last four weeks to compete in a variety of career and leadership development events. Eight members traveled to Shelby on March 16th to compete in ATMS, Livestock Judging, and Horse Evaluation. Due to COVID-19, each district was only able to send the top two qualifiers in each competition to the State Convention. Our one-man ATMS team, Trevin Grammar, did outstanding coming in 10th place with two perfect 50-point scores in the Geographic Information Systems and Electrical portions of the competition. Our Livestock Judging Team consisted of six ladies, Sydney Hawks, Alyson Leach, Jordan Leach, Shawna Osburn, Savannah Riggin, and Lily Wickum, that brought home a 6th place district win! The four-person Horse Evaluation Team, Sydney Hawks, Alyson Leach, Jordan Leach, and Emma Wickum, secured the 1st place divisional title and represented the Glacier District in Corvallis on March 26th at the State Competition where they placed 10th overall in the state. Jordan Leach also earned the 1st place individual title in District Horse Evaluation. On March 19th, Jordan Leach and Emma Wickum traveled to Cascade to compete in the Glacier District leadership and speaking events. Emma competed in Extemporaneous Speaking taking 1st place and earning her ticket to state. Jordan competed in Sr. Creed Speaking with a second-place win and Star Greenhand, with a 1st place win sending her to state for both events as well.
State Convention was April 7-10 in Billings this year. We had a fun-filled four days networking with other chapters and celebrating the many accomplishments of each FFA member. Emma competed in Extemporaneous Speaking six days post knee surgery. She didn't make it to the final round of four but still placed in the top 15 in the state. Sydney Hawks participated in the year-long competition of Star Reporter, submitting our monthly reports in a timely manner and documenting the chapter's many events and memories in the chapter scrapbook. Each chapter delivers their scrapbook to the State Convention to compete for Star Scrapbook. Sydney earned both Star Reporter and Star Scrapbook out of 97 chapters! Jordan competed virtually over three days for Sr. Creed Speaking and brought home a 4th place win. Star Greenhand was comprised of an interview in front of a three-person panel and the evaluation of the record books for her SAE (supervised agricultural experience) in sheep production. She placed in the top eight in the state. Finally, Jordan also competed in the Most Inspirational Essay and Interview contest. She is no stranger to this competition as some of you may remember she was named Miss Most Inspirational in 2019. This year she brought home the 1st runner-up trophy!
A highlight of the State Convention was getting to meet our new Ag teacher who will be joining CJI this fall! We are thrilled to have ag classes being offered to the students again this year and to watch the FFA chapter grow!
Thank you to CJI schools and the parents of the FFA members for allowing me to be a part of the FFA adventure this year. I have thoroughly enjoyed every moment! ~ Mrs. Stefanie Leach